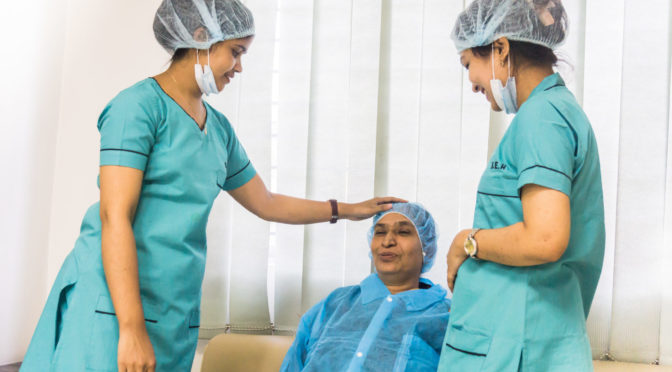 Roxanna begum, Mother of four, was suffering from advanced cataract in both eyes. Frustrated at not being able to see clearly, she knocked on a lot of hospital doors. Hospital demanded operation in both eyes with injections. But Roxanna was scared of injections. As such she kept denying operations to cure her eyes . Roxanna’s condition worsened by the day. Her morale grew weaker as she could not even see her newborn grandchild. Finally Roxanna decided to take one final step towards the cure. But her fear of needles remained. Then Roxanna came to Bangladesh Eye Hospital Chattagram, where she came to find out that Dr. Prakash Kumar chowdhury would be able to perform this advanced cataract surgery without injections. Clinging onto this faint hope, Roxanna gave it a try. She underwent her operation. Her family was present during the whole ordeal.After operation, when the doctor asked her to open her eyes, she hesitated, then gathered the courage to open her eyes. Her first words were “ Allah amar cheler bou etoh shundor! Doctorshab, Allah apnake shoto ayu dikh, Baki chokh kokhon korbo”.

Roxanna came a scared patient in trouble and left as the happiest grandmother, able to see her family clearly once more.